While behavioural economics has become a part of the mainstream of economic thinking for over a decade and half, the concept of nudging which applies an understanding of behavioural economics to improve outcomes has been in the spotlight since the award of the 2017 Nobel Memorial Prize in Economic Sciences to Richard Thaler who pioneered the ‘nudge’ theory. Behavioural economics examines how gut instincts often overrule rational decision-making. Nudging uses these quirks of human decision-making to improve overall outcomes be it in health, wealth or happiness. Based on his research at the University of Chicago Graduate School of Business, Thaler found that making minor changes in context and using different prompts can significantly impact decision-making both for better and for worse. A nudge is defined as any aspect of the design of a choice (choice architecture) that alters people’s behaviour in a predictable way without forbidding anything or actually changing the choice at all. While traditional economics portrays human beings as self-interested agents who seek optimal, utility maximising outcomes, behavioural economics posits that human beings do not always act in their own best interests due to certain inherent biases in our nature. ‘Nudge’ theory uses these biases to make it more likely that human beings act in their own best interests by altering the choice architecture presented to them. A classic example of nudging suitable behaviour is to use the power of the so-called “status quo bias” (people tend to go along with the status quo or default option) by automatically enrolling people into pension schemes with the option of an opt-out. The idea was that auto enrolment would make saving the default for employees, and thus make it easier for them to do what they really wanted to do and push up savings rates. It has been found in the UK and in the US among other countries that auto-enrolling people into pension schemes rather than providing them the option to join a pension scheme significantly increases enrolment in pension schemes. Since auto enrolment was introduced by the UK government in 2012, active membership of private sector pension schemes jumped from 2.7 million to 7.7 million in 2016. 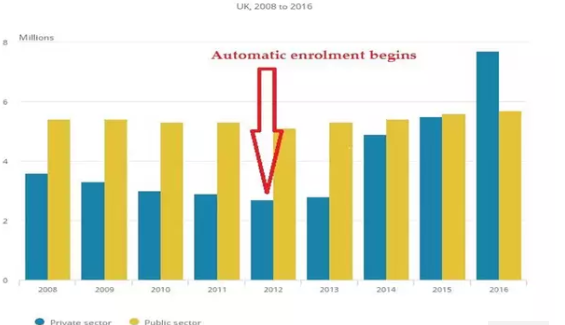 Figure: Impact of Auto-enrolment as default option in UK private sector pension schemes
Other examples in which nudging has resulted in better outcomes include providing prominence to healthy foods in canteens (to reduce consumption of junk fund) and having opting in as the default option for organ donations.
Some of the key cognitive biases that can be tackled using suitable nudges are:
1)      Anchoring is the tendency of an individual to rely too heavily on an initial piece of information offered (known as the “anchor”) when making decisions.
2)      Availability Bias is the tendency to let an example that comes to mind easily affect decision-making or reasoning.
3)      Optimism and Overconfidence Effect is a bias in which a person’s subjective confidence in his or her judgements is reliably greater than the objective accuracy of those judgements, especially when confidence is relatively high.
4)      Loss aversion refers to people’s tendency to prefer avoiding losses to acquiring equivalent gains.
5)      The framing effect is a cognitive bias in which people react to a particular choice in different ways depending on how it is presented.
When is a nudge needed?
There are a variety of fraught choices that are suitable candidates for nudges. Nudges can combat the tendency to avoid events with immediate costs and delayed benefits and over-indulge events with immediate benefits and deferred costs). They can help human beings solve especially rare or difficult problems that are likely to be mishandled through confusion and lack of experience. Nudges can increase feedback so as to improve the ability to learn from past experiences, and also provide a better sense of how preferences are likely to turn out in unfamiliar contexts in which the situation cannot be translated to understandable terms.
The word NUDGES forms an acronym for 6 points which are the golden rules for choice architecture:
iNcentives: Incentives can motivate people to make choices as soon as possible. Incentives should be designed such that they immediate and salient. While designing incentives, a choice architect should keep the following questions in mind: Who uses
? Who chooses? Who pay? Who benefits?
Understand mappings: The mapping between a decision and its outcome should be made clear. This is especially true for complex decision-making.
Defaults: According to the status quo bias, if, for a given choice, there is a default option—an option that will obtain if the chooser does nothing—then a large number of people tend to end up with that option, whether or not it is good for them. If a choice-maker decides to pass or defer making a choice, then a good default choice should be made on his / her behalf. The default choice should be the safest choice of all.
Give feedback: The best way to help Humans improve their performance is to provide feedback. Well-designed systems tell people when they are doing well and when they are making mistakes. Ideally, one or more of the five senses viz. sight, hearing, touch, smell, taste should be involved in the feedback. Even if the real feedback becomes available at a later stage, some kind of nudging feedback should be immediate.
Expect errors: Humans make mistakes. A well-designed system expects its users to err and is as forgiving as possible. The cost of errors should be none or minimal.
Structure complex choices: Rather than throwing am array of choices on a choice-maker in the form of a list (which leads to people deferring decision making or not making the right choice), choices should be structured such that irrelevant choices are eliminated as early as possible and the options are narrowed down. Choices can be represented in the form of questionnaires or flowcharts.
To summarize, as human beings and as a society, choices and decisions are inevitable. Nudges are powerful tools that apply behavioural economics to ensure that people and society as a whole make better choices and decisions. Understanding how nudging works helps public policy makers to design choices such that people can make good decisions for themselves.
References:
1)      Nudge: Improving Decision About Health, Wealth and Happiness by Richard H. Thaler and Cass R. Sunstein
2)      https://www.theguardian.com/world/2017/oct/09/nobel-prize-in-economics-richard-thaler
3)      https://www.independent.co.uk/news/business/analysis-and-features/nudge-theory-richard-thaler-meaning-explanation-what-is-it-nobel-economics-prize-winner-2017-a7990461.html
4)      https://www.ft.com/content/9c6ef418-19e7-11e5-a130-2e7db721f996
5)      https://fs.blog/2015/12/biases-and-blunders/