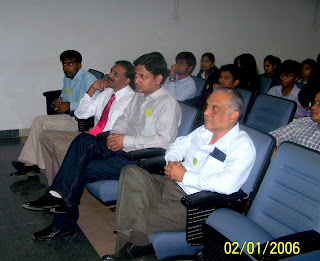 He told his life story right from where he worked as a waiter at Wimpy to becoming a marketing director at Just Eat. He said value for money is what he learnt at Wimpy. And from that day there was no looking back. His second job was as a tech support at Accenture, which he too left for Wipro and later Yahoo. Finally, his big move was Hungary Zone. “Like what you do or you will have to like you are doing” he told the students. He stressed upon the importance of decisions in your life and how these are the things can define your whole life .To make his point he talked about his wake up call that he got while working at Wipro and choose to fight it out one more month at Hungary Zone.

He then moved to talk about entrepreneurship, and gave it an edge by telling ‘The Brick Layer story’, which lays emphasis on step by step building of an idea. For better clarity, he explained the Business Model of Just Eat, which talked about their consumers, delivery restaurants, website and the just connect terminal. All this, brought the company’s operating strategies and ideas to light.

Starting in 2006 from a 2 BHK apartment, Just Eat has 100,000 users in 26 cities and a valuation of $ 15 million. For the budding entrepreneurs, he said, to become an entrepreneur; there should be an attitude that says, “I have nothing to lose”. Entrepreneurship is always worth it and there is no such thing as a failed entrepreneur. “Please do stuff; you’ll regret it less than not doing it at all” he said. He had some advices to give to the students at the end of his presentation. Going out there and trying, was the most highlighted advice, for any entrepreneur.

The session later picked up a Q and A format, where students, asked questions and this led to a further discussion on failure in entrepreneurship. He gave the example of Hungry Zone and how they never quit, even though they had a zero marketing budget. Failure is only when one stops trying. Examples of Kiran Bedi and Mahabharata, was discussed, in context to this.

On being asked about the Indian consumer, he answered that people here follow a herd model, you just have to capture the attention of the queen bee of the market and it is followed by the rest.

Upon winding up, questions about his life, led to know about the irrelevance of an MBA for entrepreneurship, he could only recall the important contribution of his contacts that he had from his college to Just Eat.

Advertising is down for the next year plans at Just Eat, he concluded with the thought.

Many anecdotes that he shared from his life made the whole lecture full of enthusiasm and learning. Prof. Ramesh Puttana’s interaction with the speaker made it even a much more learning filled experience for everybody. This guest lecture added a great value to the whole NEN E- Week and to the learning experience of the students.