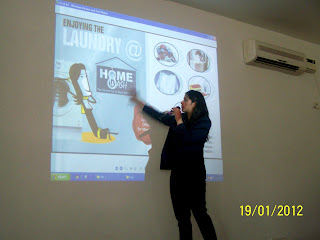 There was a sequel event to Marketing Premier League, held on the campus of ISME Bangalore, on 19th January 2012.

Eight groups presented the brand advertisements for their products, through:

Each group presented their product advertisements through the above mentioned ways. The great deal of effort and hard work was showing by the students the advertisements. The TV ads and Radio ads showed a lot of creativity and imagination of the students, where students themselves shot some hilarious ads, and got the real idea of creating the ads in the industry.

The Winners for the event were:

Prof.Tagat and the director Prof.Nitin Garg congratulated the students and Prof.Marya Wani for mentoring the students to come up with such an event. A special treat was for the crowd in the form of fun cuts that showed the hilarious, behind the scenes acts by the students while shooting for the TV ads. A lot of enthusiasm and spirit of the student made MPL-2 a success and also a great learning experience for the marketing students.