Abstract: This article examines the Libor ((London Interbank Offered Rate) scandal which rocked the global financial markets in July 2012. The scandal involved the manipulation of the LIBOR rates which adversely affected the multi-trillion dollar derivatives markets worldwide. The financial irregularities, the analysis of the problem, the impact on the markets and potential solutions are addressed.
“Love’s Labor Lost “was one of the early Shakespearean comedies; however, in the recent months,a tragedy was unfolding in London, Shakespeare’s home turf which has global financial ramifications. The tragedy involved “Libor” (London Interbank Offered Rate);   Libor is primarily the average interest rate arrived at through interest rate disclosures by major banks in London.  Historically, Libor was a highly respected benchmark supporting approximately $350 trillion derivatives.  Even the US’s derivative market which covers the student loans, mortgages, financial derivatives, and products is tied to the Libor as a reference.
Unfortunately, some of the leading London banks and other international commercial/investment banks manipulated the Libor to make a quick profit in the multi-trillion dollar derivatives market; even a marginal difference in Libor translates to millions in profits to the insiders who are aware of the Libor rates. Investigations by regulatory bodies on either side of the Atlantic showed that banks were reporting either increased or reduced rates to benefit from the trades or to mislead investors about the credit-worthiness of the banks.
Libor is controlled by the highly respected British Banker’s Association (BBA); it traditionally worked closely with Britain’s Federal Bank and also the U.S. Federal Reserve.  Historically, Libor was used as an overall indicator of the health of the banking industry.  In general, if there is an overall improvement in confidence, banks would report lower interest rates; conversely the banks wouldreport higher rates with lower confidence and negative sentiment.  Preliminary investigations have shown that banks were misrepresenting the facts to make quick profits by raising or lowering Libor.  The magnitude of the problem and the amount of money involved is staggering.  The notional values of $350 trillion of derivatives are influenced by Libor.  Hence, even if Libor moved by a basis point (by 0.01%), the different players could make a few million dollars in a very short period. Additionally, with the onset of the financial crisis, some banks were reporting wrong rates to project a rosy picture about the financial status of the bank.
The manipulation of Libor is a symptom of deep systemic problems in the global financial world.  More importantly, it brings into focus the ethical issues that plague the financial world.  Ethics and integrity are the bed rock of a free market system.  The failure of Lehman brothers and the global financial meltdown, the European crisis and the Libor unravel a fundamentally flawed financial system riddled with unethical investment bankers and finance executives.  This undermines the free market system and adversely affects economies world-wide.  It may take years to recover from this economic crisis after flushing out the toxins from the global financial system. Unfortunately, the scandal unraveled just when Europe is reeling under the worst financial crisis after world war two.  Portugal, Ireland and Italy, Greece, and Spain (PIIGS) are facing a severe sovereign debt crisis and the Libor scandal compounds the problem.
The scandal threw up too skeletons in the banking sector.  Stiff penalties were slapped on Barclays’ bank on June 22, 2012; the Commodities Futures Trading Commission imposed a fine of $200 million, the U.S. Department of Justice $160 million; and the Financial Services Authority imposed a penalty in pound sterling to the tune of 60 million.  The Barclays owned up the malfeasance and two of its executives, Mr. Marcus Agius, Chairman and Mr. Bob Diamond, the CEO resigned after the scandal blew the lid off.  Interestingly, the shady practices were perpetrated as far back as 2005 and during the 2008 global financial meltdown, lower rates were reported to give the impression that Barclays Bank was in a financially healthy state.  Investigations, both official and unofficial revealed the murky state of affairs.  Unfortunately, even the regulatory authorities and the Bank of England appear to be complicit in the Barclay’s in rate manipulation; the shady dealings also came to light on the other side of the Atlantic in the U.S. and Canada.  What is intriguing was the fact how this financial skullduggery continued unnoticed for so long.  All the so called fences and control mechanisms appear to be a farce as the banking giants perpetrated shady financial dealings right under the nose of the regulatory agencies.
In the light of this scandal, one can’t help but ask what is fundamentally wrong with this system?  We need to go back in history to trace the origins of the problem.  Ronald Reagan and Margaret Thatcher, the two advocates of an unfettered free market system opened the flood gates leading to deregulation and mergers of financial institutions.  This led to the creation of financial behemoths who wielded tremendous power over the markets and also the state in a subtle fashion.  It’s elementary; once a bank becomes indispensable for the financial health of the national economy, the state itself will be forced to prop up the muddled bank overtly or covertly.  This is probably what happened during the 2008 financial crisis.  This was corroborated by one of the senior Barclay’s executives who stated to the Parliamentary committee that the British government might have given a subtle approval for misrepresenting the facts to avert a bank failure.
Conclusion
How do we avert such financial malpractices in the future?  The answer lies in greater regulation, separating the investment banking from commercial banking, preventing mergers and breaking up the financial giants thus reducing their overall clout in the markets.  This may sound like too simplistic an answer to such a complex problem.  However, there doesn’t seem to be an easy fix.  Here’s the conundrum; excess regulation stifles innovation, competition & productivity; whereas, unregulated markets and the finance industry leads to abuses and financial malpractices.  The challenge lies in balancing the two.  We cannot rely solely on self-regulation by the banking industry. 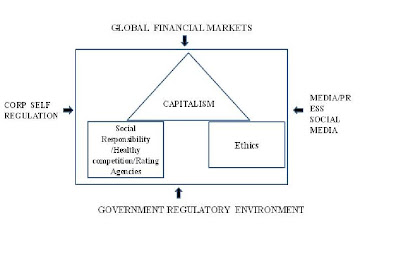