This is an oft-quoted adage heard many often. However how many of us have thought about its veracity. Is it worthwhile to have a good attitude???What according to the world means good attitude or positive attitude? Here are some of the findings in our day to day interactions.
It is widely proven in the management theory about the impact of attitude building in eliciting a good personality. Two of the top five Ivy League business schools namely Harvard and Stanford have stated that 85% of the reasons a student gets a job and continues in that job are due to his “attitude” and 15% is due to technical or specific skills. A recent research conducted by the Stanford Research Institute and Carnegie Mellon Foundation attests a strong correlation between the right attitude and a long term job success.
It is generally observed that people who have a good or positive attitude tend to display the following behavioral patterns:
·         A smile (Cheerful disposition)
·         Willingness to participate
·         Mixing with others
·         Consistency in behaviour
A cheerful disposition reflects sociable nature; willingness to participate denotes leadership qualities and mixing with others reveal high interpersonal skills which strong team dynamics. This is a simple logic behind individuals with positive attitude.
Some of the major high performing organizations such as IBM, Reliance, Infosys, and Wipro carefully select their employees to fit in with the existing corporate culture. It in turn leads to a highly productive organization. Any workplace or organization for that matter would like to hire people with positive nature.
How are attitudes formed?
A simple framework denotes the attitude formation among the individuals.
(Based on the original work of the author) 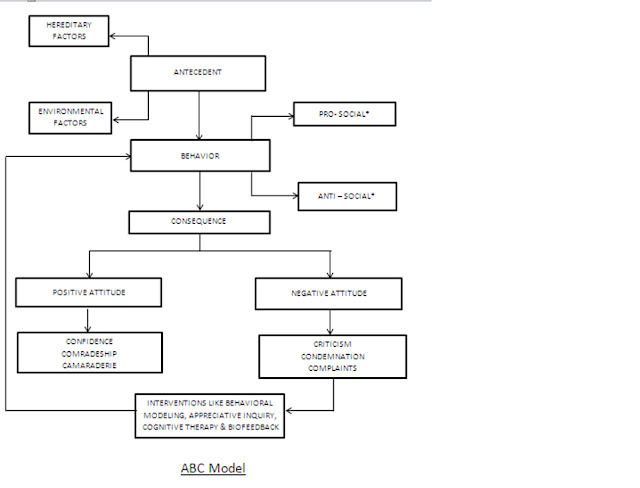 *Anti-Social means Anti –organizational behavior (Organization Dysfunctional attributes)
The ABC model refers to the Antecedent, Behaviour and Consequences that is primarily responsible for attitude formation. The antecedent’s stems from two factors: one is the hereditary factors, whatever has been inherited through the genes and the secondary factor is the external environment. The environment can be one’s exposure to the values, belief system, companions influence, schooling, upbringing etc. This is called the Bandura’s “Social Learning “. Individuals observe their role models and follow their footsteps thus creating an Attitude.
These factors create the behavioral patterns; it is categorized into Pro-social or Anti-Social behavior. The prosocial behavior leads to a positive attitude. Defining the term pro- social behaviour “Behaviour intended to benefit another individual/group regardless of motive is pro social behaviour” Roche (1991) defined prosocial behaviors as actions that without any prospect of an external reward, favor for other people, groups or social objectives. The term prosocial behaviour was coined by Wispe (1972) as antonym for antisocial.
On the contrary the anti-social behaviour leads to a negative or pessimistic attitude. No individuals can be classified as an optimist or a pessimist. It is based on the degree of pro- social and antisocial behaviour that they tend to display during their regular transactions which earmarks them as a positive or a cynical person.
Reactions of people with a negative attitude:
·         I- know -all –attitude
·         Nothing great is happening here- negative talks and  unproductivity
·         Nitpicking & bl
ame game-finding fault with everyone
·         Indulging in counter-productive activities
Responses of people with a positive attitude:
1.       Taking responsibility for their own actions- “ I am responsible for the  outcome “
2.       Maintaining good rapport with all- “ I need everyone, there is no space for groups, religion or caste”
3.       Promoting a culture of learning & sharing- “ Let us know that the acronym of TEAM is  T-Togetherness, E-Empowering , A-Achieve  and M-More is the need of the hour
4.       Being flexible and cultivating a sense of tolerance-  “All is in the game”
5.       Believes in change- “Change is the only permanent factor and let us adhere to it”
Is Attitude a permanent link?
According to various studies it is proven that people can change their mind set by making a deliberate attempt to change. There are various interventions used for shift in behavior. “Behaviour modeling” “Appreciative Inquiry” “Life-Positions”  “Cognitive Therapy” “Biofeedback” is used as correction tools in many of the Behavioral skill training.
Psychometric tools like Thurston’s scale of equal appearing intervals, Likert’s method of summated rating, The Bogardus social distance scale, Osgood’s semantic differential technique can be used to evaluate an individual’s attitude. Some of the psychometric tools like MBTI, FIRO-B, and 16-PF are also used as a recruitment and selection tool in some of the so called big organizations.
Irrespective of whatever tools that have been identified, an Individual should make a conscious effort to change his mind set. Or else the whole attempt will be futile and it is very well known that no training can be a miracle wand that can change a negative attitude into a positive one.
So in a nutshell, it is highly important to nurture a good attitude; at least making an effort to create a good culture through compatible nature to live and let live.
The timely reminder is “Heavy rains remind us of challenges in life. Never ask for a lighter rain. Just pray for a better umbrella. That is ATTITUDE.”
(Views expressed are personal)