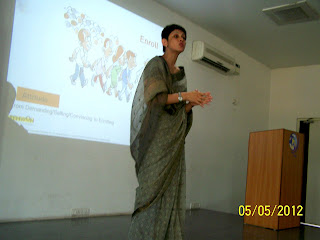 On 4th May there was a guest lecturer in ISME, Bangalore by Akanksha Pundir, senior consultant of Erehwon Innovation Consulting. She has over 15 years of experience across media, research, manufacturing and technology industries with firms such as Sony Entertainment Televisions, The Economist Group, NASSCOM and Microsoft.

It was a session specific on innovation and thinking beyond the monotony of routine. Being an exceptional speaker, she had the attention of everybody while she provoked the thinking process of the students beyond the ordinary. Many interesting examples and incidents were discussed where the stress was laid on daring to think the unthinkable and acting on it. Creativity and innovation was given a completely different definition during the session as she explained the commercialization of new ideas and creativity, so that they can be the shapes of new inventions and discoveries. Tata Nano was given as an example of ‘great thinking’ from India where a vision and a goal was attained with great finesse.

In today’s world with so much competition, only a person with an orbit shifter mindset can make a difference, she stressed. She mentioned some points that are essential for an orbit shifter mind set. Move from adjusting to reality to creating new reality. Change your attitude from processing focus to purpose focus. And ultimately, move from the zone of overanalysing things to actually experimenting things.

Another great concept was introduced known as the INJ, which is an acronym for the three modes that a person can bring to situations. First one is the Information seeking mode, where you understand and give. Second, is the new mode, where you discover ideas, alternatives and possibilities. And the J mode is the judgement mode, which includes conclusions and evaluations. The value you bring to the situations depends upon which mode dominates.

With inspiring stories of people like Erik Wiehenmayer who despite being blind, scaled all the highest mountains of all the seven continents, the guest speaker ended the lecture with more inspirational quotes.