A LOT IS HAPPENING OVER A COFFEE..!!! (Case Study – Valuing IPO of Café Coffee Day)

~~
Beginning of the Case ~~
A LOT
IS HAPPENING OVER A COFFEE..!!!
(Case Study – Valuing
IPO of Café Coffee Day)
Swarup
prefers to spend his Sundays as dull as possible. The Sunday of October 11th
of 2015 was going to be different for him. On any other weekday he would’ve commenced
the day with getting a global market update from the Bloomberg app on his iPad.
Being an investment broker for several HNI investors of Equate Advisors, Swarup
is a much sought after relationship manager by his clients. His clients feel Swarup
is one such adviser, whose stock picks rarely go wrong. His boss at Equate
Advisors is generally happy with his performance in terms of delivering numbers
and maintaining satisfied customer relations, but, he feels Swarup sometimes
contradicts the stock advises of central research team. Swarup argues that’s
precisely the reason for his success. He does not blindly recommend a stock to
his clients, instead, with every such recommendation that comes to him from his
research team in Mumbai, he does his own valuation of the stock before he
arrives at his conclusion. He strongly believes this always works.
By
the time he woke up on this Sunday it was already 9.30 am. He stepped out of
his apartment after a short work-out module at the club-house. The
generally-residential area that it is, Sahakar Nagar in Bangalore, was
semi-urban in landscape. Less than 200 meters from his apartment complex was an
outlet of Café Coffee Day (popularly
called CCD), to which Swarup was a regular visitor. He had an emotional connect
with CCD, as most of his successful client meets happen in CCD outlets, thanks
to widespread presence across Bangalore; he spends most of his leisure and he
feels rejuvenated after every visit in CCD; and more than anything, it is in
this CCD that he proposed his girlfriend (and she accepted..!!). Truly a lot
happened to Swarup over Coffees in CCD…!!!
He
walked into the shop ordered his regular cappuccino with butter cookies and unlocked
his iPad

screen, while still being amused at the young crowd at the shop
already barged in. The moneycontrol.com
website that he had open yesterday was still on the first screen. As if it was
usual, Swarup reluctantly glanced through news stream, and he found a news item
– “Café
Coffee Day to go Public”. He also recalled grapevine download from his
chitchat with his research team that Equate Advisors are going to recommend CCD
for a buy at IPO aggressively. His hot espresso was served and he could just
smile at the thought of how hot CCD’s IPO going to be. He decided to be better
prepared. And this Sunday was to become a working Sunday for him.

Swarup
believes valuing a stock means valuing a business. It’s important to understand
the fundamental business model of the company. He browsed through the red
herring prospectus (RHP) of the company and few websites to gather relevant
information and made notes as below, as he usually does:
i.
Stakeholders: CCD’s parent company
Coffee Day Enterprises Limited (CDEL) is held by V G Siddarth-led promoter
group upto 93%, whereas private equity firm KKR, Infosys co-founder Nandan
Nilekani and Rakesh Jhunjhunwala’s Rare Enterprises make it to the list of
major shareholders with 3.43%, 1.77% and 0.24% equity stakes respectively.
ii.
Businesses: CDEL classify
themselves into mainly food service market, as their primary business is into
coffee products. In addition to having the largest chain of cafés in India,
CDEL also operates in procuring, processing and roasting of coffee beans and
retailing coffee products across various formats. Their diversification into
non-coffee businesses include technology park development, logistics solutions,
financial services, Resorts & Hospitality and ownership stakes in IT-ITES
companies like MindTree.
iii.
Environment: Their claims about
the growth in coffee vending business gets justified with the changing
consumption pattern of northern and western Indian tea drinking population also
preferring to coffee consumption. Added by strong economic and demographic
aggregates like increasing percapita income, rising urbanisation, discretionary
spending, out-of-home food consumption trends, corporatisation etc., coffee
outlets today are in demand more than ever.
Indian QSR (Quick Service
Restaurants) market is expected to grow exponentially in the coming years. The
same (in Rs. Billion) is shown in the below graph. (Source: Techopark, March 2015) 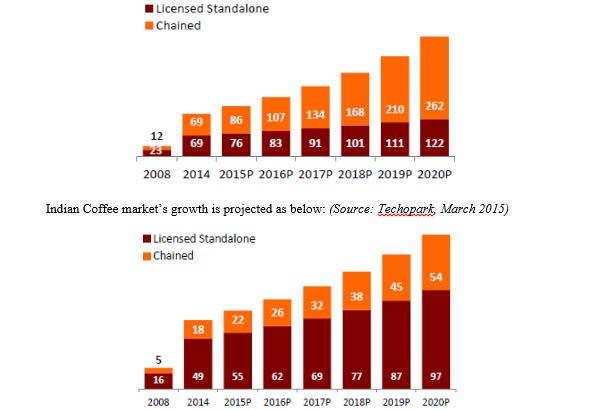